(What a memory Wally has – he has forwarded these memories at the age of ninety-two-and-a-half. Jackie Mullineaux)

I was born on 25th November 1923 at St Olive’s Hospital, Rotherhithe, London. My father divorced my mother and he was unable to care for my sister Rose and I. When I was two and a half years old, and Rose was five, Dad placed us in Shirley Schools Cottage Homes, run by the Bermondsey Board of Guardians. We were two little beings at Shirley, amongst some 550 boys and girls, all were from broken homes, or had been orphaned. Our life there was good, not that we knew anything different.

Parents of children were allowed to visit every other Sunday between two and four in the afternoon. I was seven years old before my sister Rose came to call for me one day. We trotted off to the Bandstand opposite the school to spend some time with our Father and Grandmother. I had no idea what they looked like, or what to expect. It didn’t upset me emotionally. I was too young to understand, but I did look forward to their regular visits and there was a feeling of warmth between us. Unfortunately the strong bonds of family life and love had been broken, never to return.

In July 1932, my father decided to take us out of Shirley Schools. Rose was sent to the Salvation Army Home for Girls in Ramsgate and I was placed in Mr Fegans Boys Home in Stony Stratford. At the time of our separation, Rose was almost eleven and I was eight and a half. We didn’t see each other again for five years. Rose has often said she was happy at her home in Ramsgate and I settled well and happily into life at Fegans. 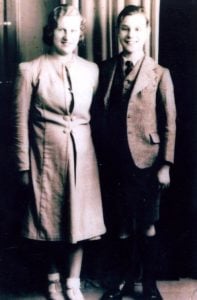 In July 1937, Rose and my Dad visited me at Stony Stratford and we spent a few hours in Northampton.

We had this photograph taken in Jeromes. Rose was nearly sixteen and I was thirteen and a half. 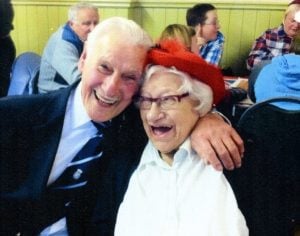 This was Rose and I, at my surprise 90th birthday party in November, 2013

Mr Fegans Homes took care of me from July 1932 until August 1938 at Stony Stratford. I then went on to the training farm at Goudhurst until December 1939.

I remember my days at Fegans fondly and quite clearly, despite my age. I hadn’t been at Fegans for a week, before I was punished by Mr Bennett! I soon learned to do what I was told! I had been talking in the Dining Hall after eating my meal. Talking was only allowed when we were actually eating; quite a clever idea – would little boys prefer to talk or eat?! I was asked three times to stop talking, and of course I carried on! Mr Bennett leathered my backside with a slipper in the boot-room. That was enough!! This was the first time in my life to be punished for anything!

Talking about eating, I remember our daily meals. Rissoles – Stew – Shepherds’ Pie – Meat Pie – Rissoles – Cooked Beef, – Cold Beef, this was from Monday to Sunday on a continual basis. When I left school, I worked in the kitchen with Stan Clements. I actually reached 2nd Squad and wore a blue badge at this stage of my life!

There were fun times too. I enjoyed all sport and always joined in. We were able to enjoy numerous activities, including football, cricket, roller skating, walking on stilts, skipping, tag, ‘release-O’ and many other pastimes. 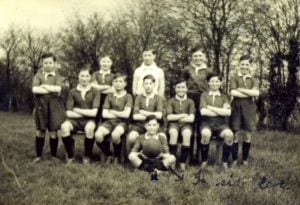 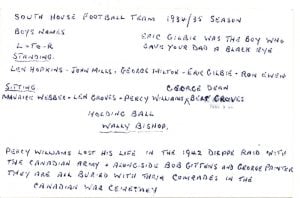 South House Football team, 1934/35 season and has noted names on the reverse.

I loved the trips we went on. I remember going to London Zoo and Wicksteed Park in Kettering. The trip to Skegness involved getting up at 05.00am for the long cross-country train journey; this was in 1933. In 1936 we went camping at Dagnall, Bucks. We also walked the 3-4 miles (I think!) to Whipsnade Zoo on one occasion. 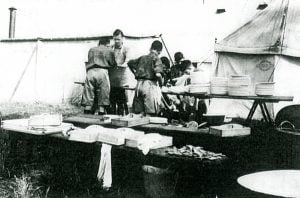 This photograph was taken on a camping holiday to Olney, Bucks in 1935. Mr Saunders is seen here, helping to wash up the dinner crocks.

Life wasn’t all a bed of roses though! We had jobs to do…. all of us, plenty of jobs! What do I remember doing? Cleaning 16 taps in the wash-room, cleaning cup baskets and cutlery and cleaning the Masters’ sitting room. I also worked in the Dispensary (writing boys’ ailments and treatments in the Dispensary Ledger. Oh, and one last job, lining up bed sheets in the Lower North Wing Dormitory. We were kept busy.

Academically I was average to semi-bright I suppose. I was the 4th top boy in Dad Swell’s class – Maurice Benz was my desk mate. I enjoyed most subjects, was always a neat writer, and I liked drawing. ‘The Scriptures’ was one exam that I always did well at, but it didn’t ever make a good boy of me! When my son Mick had found that Fegans was online (in 1999), I visited the offices in Tonbridge Wells and thanks to David Waller I was able to read through my records and learn so much about my past. 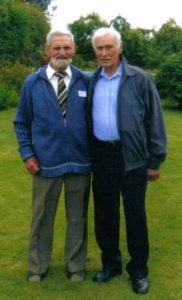 I met with Dick Parr a few years ago, another of my old buddies.

This photograph was taken at a reunion at the Training Farm in Goudhurst, in the garden of the rear barn. 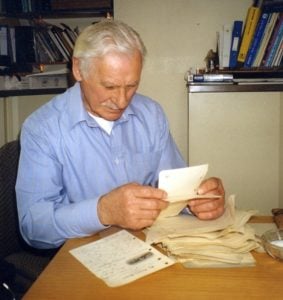 Goudhurst – our Training Farm – I think this holds my outstanding memory of my time at Fegans: I was working within over 60 acres of fruit orchards…. yes it was Kent – the Garden of England. I was hungry and took an apple to eat…. one apple in 60 acres of fruit trees. Yes, just one. I was severely punished by Mr Stacey for my misdemeanour and was sent to work in the gardens under Mr Dicky Hart. Hmm, I’ve never forgotten it.

I’m sure you can imagine with so many boys together, we did get up to mischief. I remember us daring each other to see how far we could get in the boot room and bathroom without putting our feet on the floor. This area was out of bounds as well, so when the inevitable happened and we got caught, we were punished!! I languished in the 3rd, 4th and 5th Squad, and once was put in ‘Defaulters’! That was horrible. In my opinion, defaulters was an over-the-top and cruel punishment. I can’t remember exactly what I did, but none of us did anything really criminal…. A Defaulter’s punishment consisted of: Menu – Breakfast, two slices of dry bread and a cup of cocoa. Dinner, first course and no pudding. Tea, two slices of dry bread and a cup of tea. You ate your meals on the dressers at the back of the dining hall, with your back to the seated boys. You were deprived of any play time by being given extra work, or standing by the platform in the dining hall. This was endured for SEVEN days!!!

Having trained at Goudhurst our normal passage was to work on a Farm when we left. My first job was with Acott Brothers who were dairy farmers at East Peckham in Kent. I went to work for them in December 1939. The milk from the Shorthorn Herd was bottled and delivered daily to the villagers. Apart from milking, I washed the bottles and put the caps on after Albert Acott had filled them. After meeting up with Olly Wright, one of my best mates at Fegans, I left East Peckham and moved to Sandling, near Maidstone in Sept 1941, to be closer to where he was. Mr Jimmy Clifford owned Abbey Farm and Street Farm in Boxley. Alongside Charlie, Tom and Fred, I helped milk a Shorthorn herd in Abbey Barn. I worked in this barn from autumn 1941 – 42. Nowadays, the building is a tourist attraction. If anyone would like to read more about its history, there’s lots of information on the internet.

Sandling and Tyland Farms were both rented by George Brundle. I worked mainly at Sandling Farm, but lodged in Tyland Cottage. Sandling Farm is now open the the public and called ‘Kent Life’. It advertises itself as Kent’s Rural Heritage Experience. The best time to visit is the first weekend in September, when the Hopping and Beer Festival is held. Tyland Farm has been taken over by Kent Wildlife Trust. The barn has been completely refurbished. Every room in Tyland Cottage, now called ‘Farmhouse’ is now an office. I was allowed a peep inside in 2012 when I visited the area.

To know I worked on farms that are so important to the parish of Sandling is so satisfying. Tyland Farmhouse is 400 years old. The buildings that have been preserved will always hold happy memories for me.

Olly went on to join the Navy and I stayed in Sandling for a while, working on different farms. I then spent six months in the RAF, from January 1944, training as an air gunner. I sadly failed on the Aldis Lamp (used for Morse Code). It was my decision to then join the Royal Navy. After initial training at Malvern, I was drafted to Lowestoft where I became a member of the R.N. Patrol Service, as a stoker. My one and only ship was H.M.S. Gateshead, escort, anti-submarine and minesweeper trawler. I was demobbed in May 1946.

Now on to my personal life:

I married Sylvia Dixon in Guildford Registry Office in March 1950 and together we had two children; Mick and Sally, (who now lives in America). After living together for some time, I then married Irene Whiteman in Reading Registry Office. Sadly, both marriages were failures and I guess the least said the better! However, Irene and I did have a number of children; Nigel, Adrian, Garry, Colin, Cheryl and twins Nicola and Sandra. Some time after my second divorce, I had a brief affair with Linda and we had another son, Glenn.

I’m so pleased they now have their own families and I’m proud of them all!

I am still reminiscing over my time at Fegans and counting my many blessings. I felt secure and looked after and very much part of a huge family. I have a photograph here of the choir in 1934. It was my first trip to London and we visited Horseferry Road, the original Headquarters of Fegans. (I went every year 1934 – 37; always in April.) There are some of the farm boys in the back row too. We had primrose button holes; the flowers had been picked from the training farm woods. I am in the front row with a cross on my tunic. Didn’t we look smart? 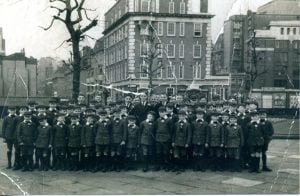 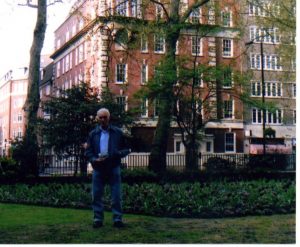 My Grandson Chris took me to that exact same spot not many years ago and I took my original photograph with me. 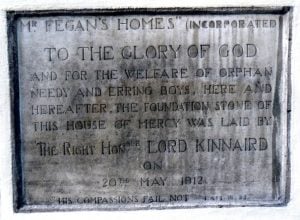 I also took this photo of a plaque on the wall at 64, Horseferry Road, London.

Oh, and to finish, here’s another farm tale:

During my first few weeks at the Training Farm, with four or five other lads, I worked under Mr Knight, the odd-job Master. We had to cut down thistles in one of the meadows. After sharpening the fagging hooks, he left us to it and went to the top of the hill out of sight. During the course of the afternoon, a rabbit bolted out in front of me. I instinctively threw my hook at it. By the time it hit the ground the rabbit was out of sight.

On retrieving the fagging hook, I looked up and saw Mr Knight returning. When he reached us, he asked what I had thrown my hook at. “A rabbit Sir”. “Did you catch it?” “No Sir”. “Well, you’ve caught a duck instead”. ZERO MARKS! Had I caught the darned rabbit do you think he would have given me the top marks… ten points?!

I’m not far off my 93rd birthday and I am living near Reading – I’m very happy.