From his father being mauled to death by a lion, to his abandonment, to representing his country and then ultimately being banned by his sport, the life of Jimmy Peters was nothing short of remarkable.

As the first black man to play rugby union for England, between 1906 and 1908, he was a pioneer. But Peters – known as “Darkie” by followers of the game in what were less enlightened times – was hardly a trailblazer. It was 80 years before a black player would wear the red rose again.

How did the son of a Jamaican circus showman overcome tragedy, disadvantage and prejudice to become the only black player in the first 117 years of England’s international rugby union history?

From early-life tragedy to Fegan’s Orphanage

Born in Salford in 1879, the first child of a black father and a white mother, Peters’ early life saw the family moving around with a travelling zoo, but by the time his third sibling was born in 1886, his father George – a lion tamer – had been killed by a lion while performing.

David Waller, Fegans’ archivist and former CEO explained “Jimmy’s early life was one that wasn’t very promising. His life before he came to Fegans was one where he was probably not in a very healthy environment. He probably had no form of schooling and perhaps no real future prospects. After his accident, he was abandoned by the circus troop and who knows what might have happened to him. He could have ended up on the streets.

“But Jimmy was obviously a very naturally gifted sportsman and Fegans provided the opportunity and discipline for Jimmy to develop in the sport of rugby union as well as a level of schooling and background in the carpentry trade. So I think that was a real opportunity for Jimmy from which he was able to move forward in life and to harness the gifts that he had.”

It was there that Peters would learn the game of rugby and play matches at the nearby Blackheath FC, before leaving the orphanage in September 1898.

Peters took a job as a carpenter back in Bristol, living in St Phillip’s Marsh, where he was reunited with his family, and he soon began playing rugby for the city’s club. 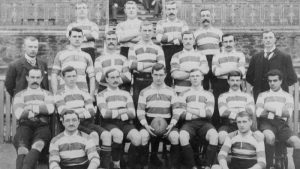 After representing Bristol 35 times over two seasons, Peters left the city in 1902 and moved to Plymouth. County Championship success followed with Devon in 1906, and he made his historic England debut against Scotland soon afterwards on 17 March.

Many commentators felt his call-up should have come sooner, with the Western Times saying on 5 February that year it was a “pity” he had been overlooked for a meeting with Wales and that “colour was the difficulty” in the matter and he had been “sacrificed”.

Controversy, injury and a ban

Four more caps would follow before his final England game in 1908, against Wales, but not before reports of racism during the visit of a touring South Africa side, who were said to be unhappy to play against a black man when they faced Devon. Peters was dropped by the RFU for England’s match against the tourists and not even selected among the top six half-backs for the national trials just months later.

He did eventually make two further England appearances after that tour, and carried on playing for Devon and Plymouth until he badly injured his fingers in a workplace accident.

He was subsequently given a testimonial by Plymouth, but this was seen as an act of professionalism that was against the RFU’s amateur regulations at that time, so he was banned from the sport.

Peters’ injuries would prove not to be as bad as first feared, but his ban meant he was unable to return to rugby union, so he accepted an offer from rugby league team Barrow for 18 months, before joining St Helens in 1914.

But the outbreak of World War One meant Peters could not play for Saints, as he was recalled to work in Plymouth’s naval dockyard. He would eventually marry and start a family in Plymouth, being described as a “gentleman” teetotal publican who would often quote Bible passages. He died in 1954 aged 74.

It was 80 years after Peters’ final cap before another black man played for England, when Chris Oti appeared in a win over Scotland in 1988.

Adapted from an article originally published on BBC Sport.

Keep up to Date With Our News