It’s not often in life that you get a real, animated glimpse into history.  Some people have the time to sit and read books with historic content, visit museums or go on tours of ruins.  Many of us can recall moments with our Grandparents sharing their stories of yesteryear. But to get to meet someone, from outside of your own family, who experienced a moment in time that you have never gone through is very rare.  When I was asked to attend a reunion for Fegans, I thought it sounded like an interesting opportunity.

On a Monday last month, a small yet important Fegans event took place in a church hall in Stony Stratford near Milton Keynes, the town where the main Fegans boys’ home was run from 1900-1960.  Fegans was founded by a gentleman called James Fegan 149½ years ago.  James was a teacher in Victorian London and he was staggered at the amount of young boys who were living on the streets with no care or access to education.  He fundraised hard and set up homes for children.

In recent times, and for a number of years, Fegans has organised what we call ‘Old Boys Reunions’.  They are held every two years and provide an opportunity for the boys, now men, who spent time in the homes to meet…or so I thought…

When I arrived a couple of older people were already at the venue but there seemed to be a great deal of tea/coffee/biscuits being prepared for so few takers.  Very slowly, I noticed the room beginning to fill, more biscuits were needed.  There was a real mix of people including; an inquisitive lady alone whose father had sadly passed away and she was keen to find out more about his time at Fegans, a spritely 79 years young man who had travelled on the train, a warm couple who knew tremendous amounts about Fegans and a friendly 95 years young man who had brought along his son and granddaughter. Yet more arrived and the room was full of people hugging and chatting.  Now I recognised the need for the large quantity of tea and biscuits!

Following the initial catch up we all moved into the adjoining Church for a service of remembrance and thanksgiving.  A lady, part of the warm couple I’d met earlier, took to the stage whilst her husband found a place to take photos from.  She is the daughter of Olly Wright, a popular ‘Old Boy’ who sadly passed away a couple of months prior to this event.  His daughter, Jackie, presented our Fegans CEO, Ian Soars, with a large cheque for a wonderful sum of money that had been collected in memoriam of her Father at his funeral. Such an incredibly generous gift from a family busting with love and pride with Ollie’s friends there too, this was an emotional moment. 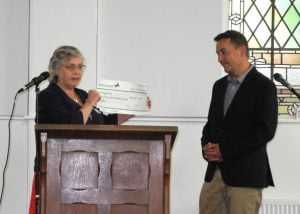 
Another very moving moment in the service was when the names of the ‘Old Boys’ who had passed away in the last two years were read aloud. Followed by hymns and a prayer it was then George Savage’s turn to take to the stage.  Himself an ‘Old Boy’ he wanted to share some of the Stoney Stratford Fegan’s Home history and a few insights of what it was like growing up there.  This is when I really got to appreciate the glints in the eyes of the ‘Old Boys’ when they saw each other again.

George told of how the wooden cups that went under four metal bed legs to stop the floor being scratched were nicknamed ‘pork pies’ by the boys.  They got up to all sorts of antics with these ‘pork pies’, they would hide them in people’s pillowcases and under their bed sheets and even put them on the tops of doors, most entertaining when someone opened the door and they landed on their head. On Tuesdays and Fridays, the boys had steam puddings for lunch.  The puddings were cooked in large ovens in small individual metal bowls that the boys named ‘baby heads’.  One day a Home Office Inspector visited and asked the boy who was helping out in the kitchen what he was doing to which he replied “I’m putting the baby heads in the oven”. 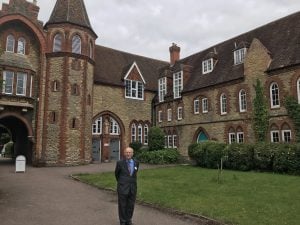 George Savage outside the former Fegans Home in Stony Stratford

Reunion guests enjoyed a light lunch kindly prepared by one of Fegans’ amazing volunteers.  This gave us time to meet yet more of the attendees and their families. We were asked questions about what Fegans is like nowadays and the issues that young people face but the focus clearly remained on sharing stories and, rightly so.  Some of the boys were only away from their birth families for a few years and then went back, and others were away for longer.  All of the boys’ upbringings were so different, some could recall loving blood relatives in their lives and some unfortunately couldn’t.  However, what they were all keen to do is tell us about the fun times they had in the homes.  How they used to sneak food out of the stores in the middle of the night, scrump apples and hide them in other’s lockers and who looked out for the House Master at night when they were all meant to be sleeping.

Something that was evident in meeting the ‘Old Boys’ was that they all had amazing skin and looked a lot younger than their real age.  When asked why, was it maybe something to do with the fresh air in the rural village they’d moved to, one said “Oh no, it’s probably because we hardly ever washed our faces!”.

We all took a walk down to the building that was once the boys’ home.  Built in the 1860s it was the St Paul’s College, a private school for boys of gentlemen from 1863-1896.  The school failed and the buildings were put on the market in 1900 for £45,000.  James Fegan managed to negotiate a considerably reduced price, only 10% of the asking price, on the proviso that the deal had to be completed within two weeks.  He fundraised so hard in that time and finally reached the target amount right on the deadline. Now offices for funky design agencies, yoga studios and a pre-school it remains an architecturally stunning building with amazing brickwork.

We heard more stories whilst standing in the grounds of this beautiful building.  The ‘Old Boys’ pointed out what dorm they slept in and what drain pipe they used to sneak out! We heard about when they were put to work making the hockey pitch and when they worked together to create a scene perfect to secure funding for a new lawn mower for the grounds. 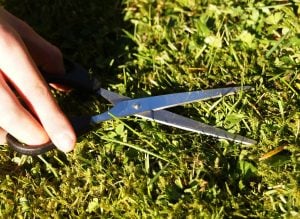 Their successful plan resulted in a brand new lawn mower!

Following the tour, we all returned to the church hall for a cup of tea.  Looking round the room there were common characteristics in these ‘Old Boys’ (and their offspring) that you would normally expect to see in relatives, they are all warm, friendly people with wide smiles, a great sense of fun and so cheeky.  The term ‘Old Boys’ didn’t suit one of them, their bodies may be older but their souls inside are still young, fun-loving and when in their company you feel alive, on your toes, like there could easily be mischief around the next corner!

Keep up to Date With Our News